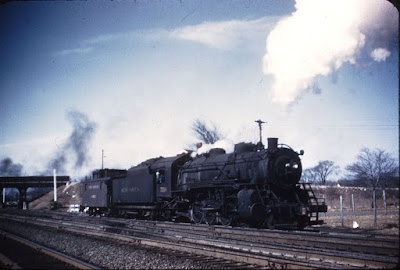 You may have heard me mention that I'm doing some research on the New Haven RR's class J-1 2-8-2 Mikados in preparation for an article in the NHRHTA's Shoreliner magazine. Like most NHRR fans, I'm pretty familiar with the J-1, especially since one of them was brought off the scrap line for a movie starring Doris Day (which, incidentally, was also mostly filmed along the Valley Line). Alas! that locomotive - the #3016 - was the last remaining New Haven steam locomotive and it was scrapped shortly after the movie wrapped up.

Now, all things being equal, I'm a bit of a contrarian and since most NH modelers that model the J-1 choose to model the 3016 (for the sentimental reasons above), I figured I'd model the 3013.

Then this image popped up during my research. Actually, I literally had just randomly grabbed it out of a sleeve to test a transparency scanner I'd just installed. I didn't even bother looking at what was written on the slide - all I figured is that it was a J-1.

Imagine my surprise when this image filled my screen! The setting looked oddly familiar - and then I looked at the writing on the slide: "NH 3016 Saybrook 1948"

In a town I model

During the year I model

The photo is even taken from the "other" side of the tracks (a fairly uncommon perspective) - which also happens to be how my model of this area is oriented.

It's often easy, especially after you've been working on a layout for a while, to figure you know just about everything there is to know about your prototype and have probably seen all the photos of the area you're modeling that you're gonna see. So when a photo of your area, in your era, which also includes something you're planning on modeling, pops up that you've never seen before . . . . well, that's definitely something special - and about as close to treasure as you get in this hobby.

Thanks to Jack Swanberg for loaning me his J-1 images (which included this slide) and thanks to all of you for accompanying me on this crazy journey - though I suspect more than a few of you can relate . . .