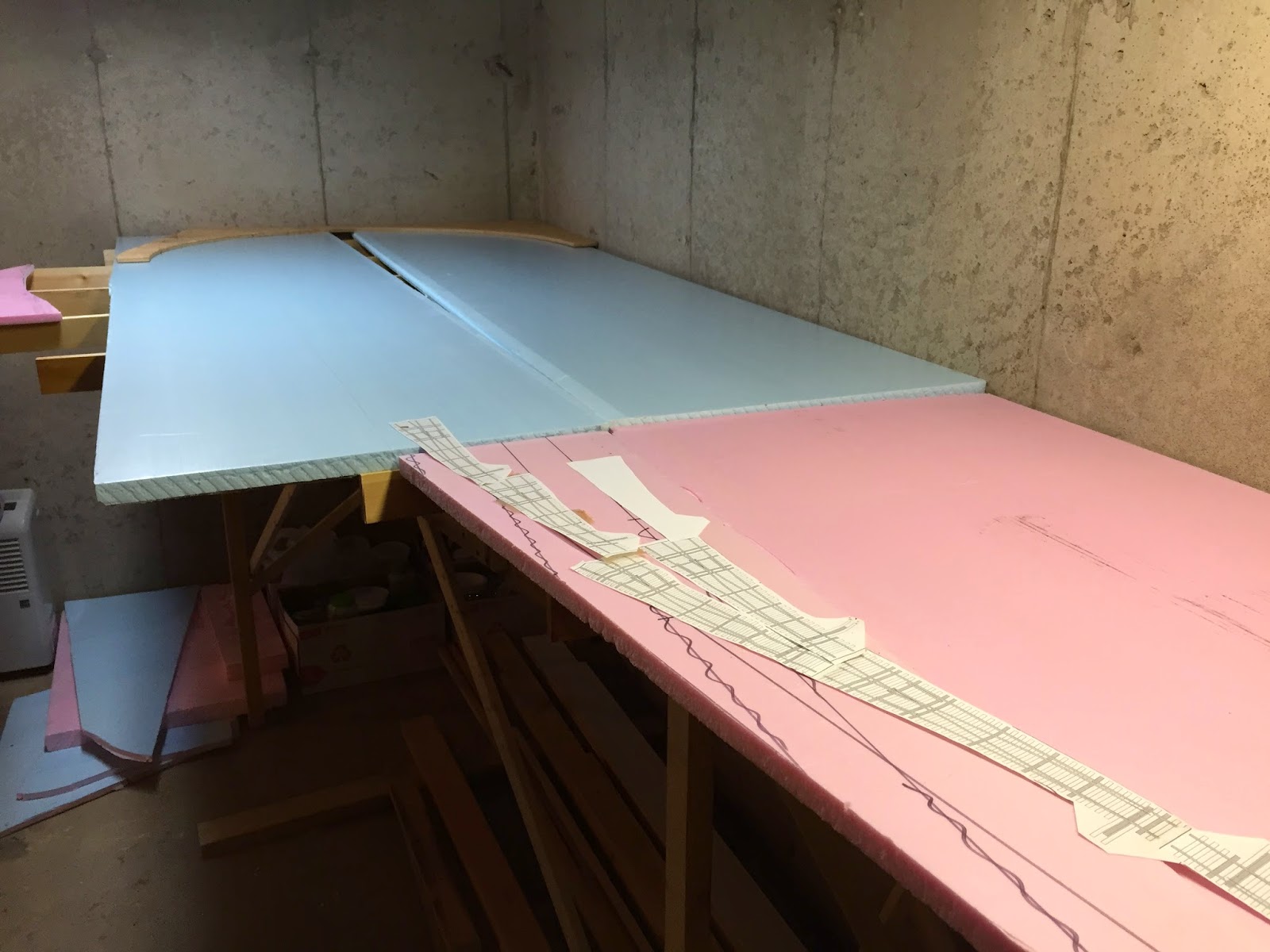 Here's an initial view to orient you. You'll recall from a previous post that this is looking into the old bike shop area. This is where the staging yard and turnback loop will be and - bonus - it's all hidden (yet totally accessible) once the door is shut. The mainline will head "east" (lower right to upper left of the photo) along the tangent side of the turnouts to the turnback track (mocked up with plywood at the end in the distance). The turnout templates show the throat of the staging yard - 6 tracks for 6 mainline trains (AirLine & Valley Locals are staged elsewhere). 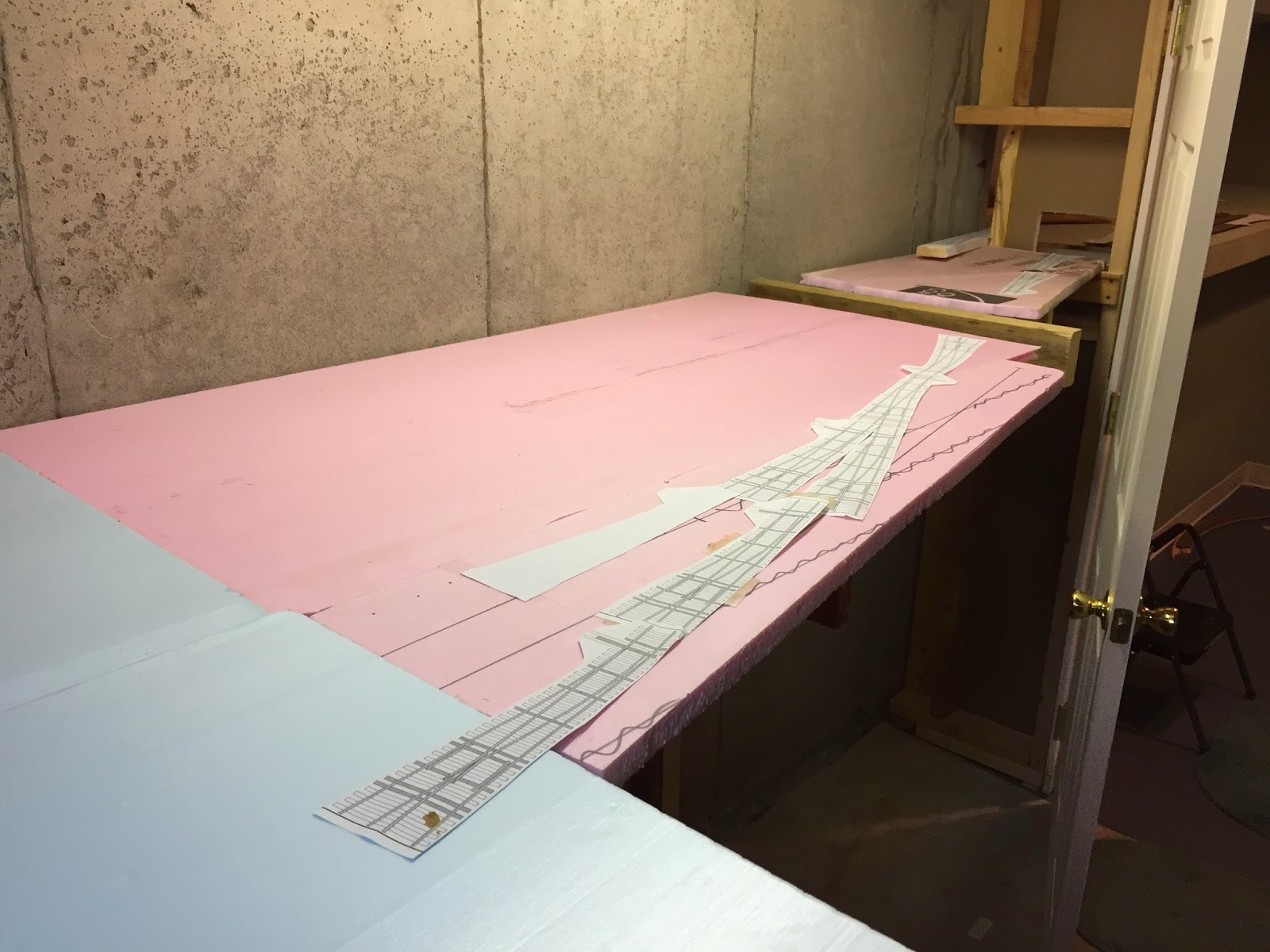 This is the view from the other direction, looking "west" toward Old Saybrook. The clever part of the design is that left hand turnout right before the gap in the foam. It allows trains to head toward the turnout in the far back left (you can barely make it out sitting on top of that 1x3 sticking out of the wall), go behind Saybrook's backdrop and - via another turnback curve in the module room - head "east" through the Saybrook scene. The turnouts beyond that "cutoff" turnout allow the single track to split into the 3-track main that will dominate the Saybrook scene. There's a 4-track main on the prototype, but that would take just a little too much real estate. I think a 3 track main will convey the scene effectively enough. 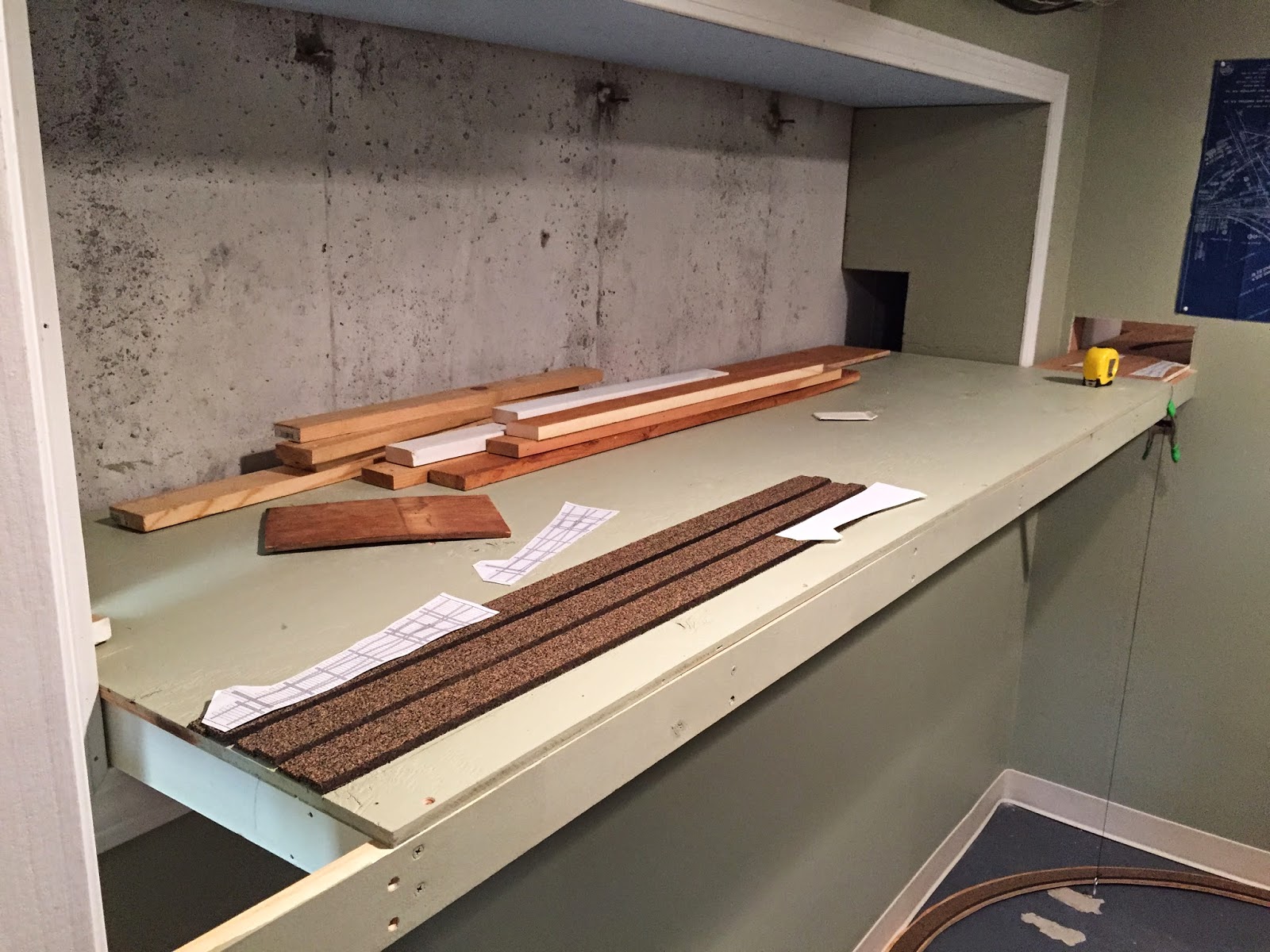 If we walk through the door, here's what you'll see - Old Saybrook: 3-track main mocked up, including turnouts for the "loop track" (long double-ended siding which goes behind the station), freight house, and the turnout for the east leg of the wye. The hole in the wall just past the yellow measuring tape is where the Shoreline comes in from the west - and there's a LH turnout there for the west leg of the wye, as well as a RH turnout for the west end of the loop track. The hole in the wall in the far back corner is where the hidden mainline supply/return track will go, with the looooong Air Line staging track above it. 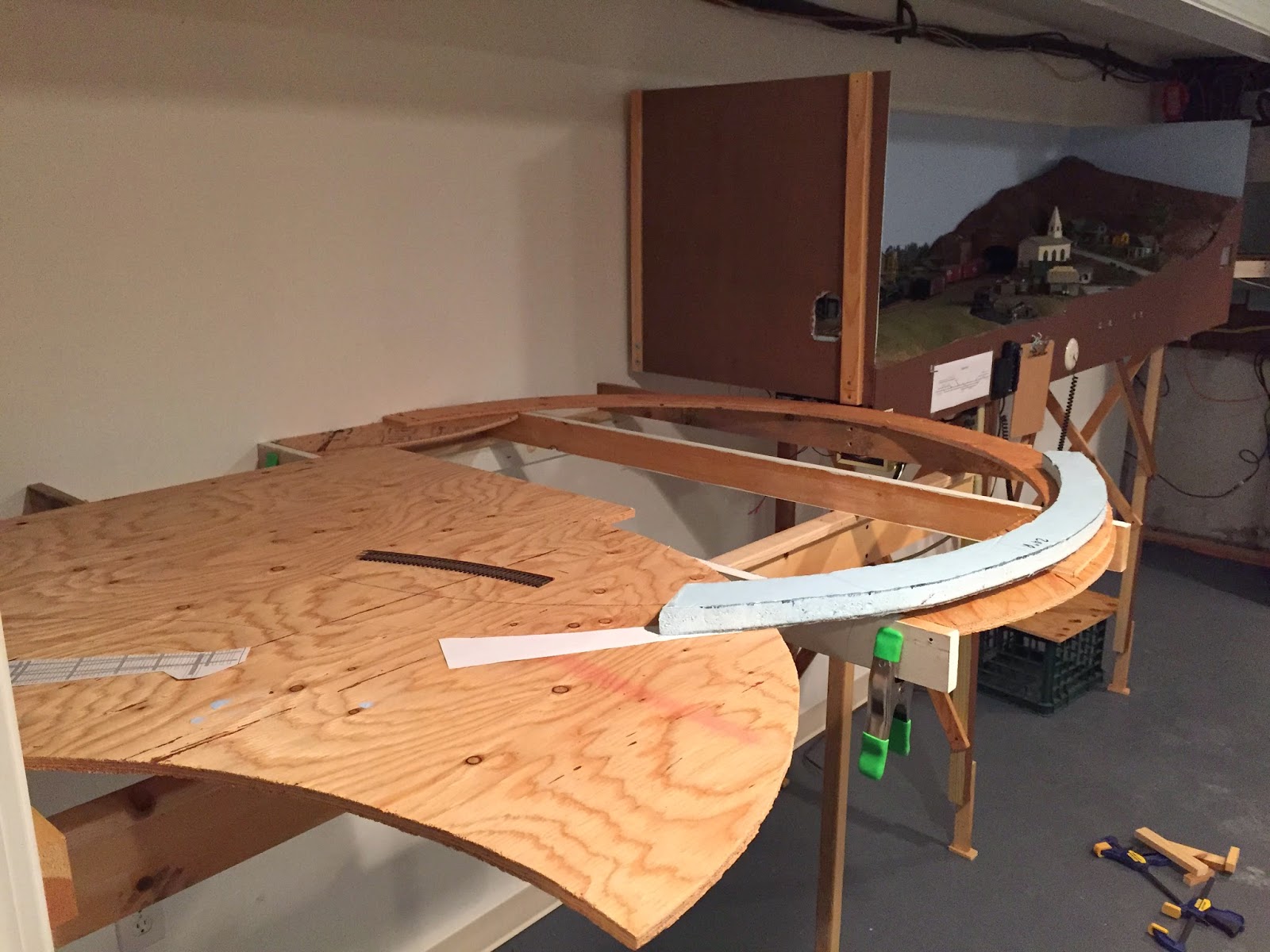 Continuing our walk "west" through the next doorway into the module room, you see immediately on your left the other turnback curve for the mainline, with 2 turnouts to split the single-track into the 3 mainline tracks at Saybrook. The hole through the backdrop at the end of the Air Line module is where the Air Line track will punch through, continue across the top of the loop, and through the next wall to go behind the Saybrook backdrop. I'm actually pretty excited about this area since I plan to have the mainline hidden under scenery, and the scenery will depict a typical farm-y scene along the Air Line through Middlefield, CT. It'll likely be the only scene that'll be prototypically accurate for the Air Line. 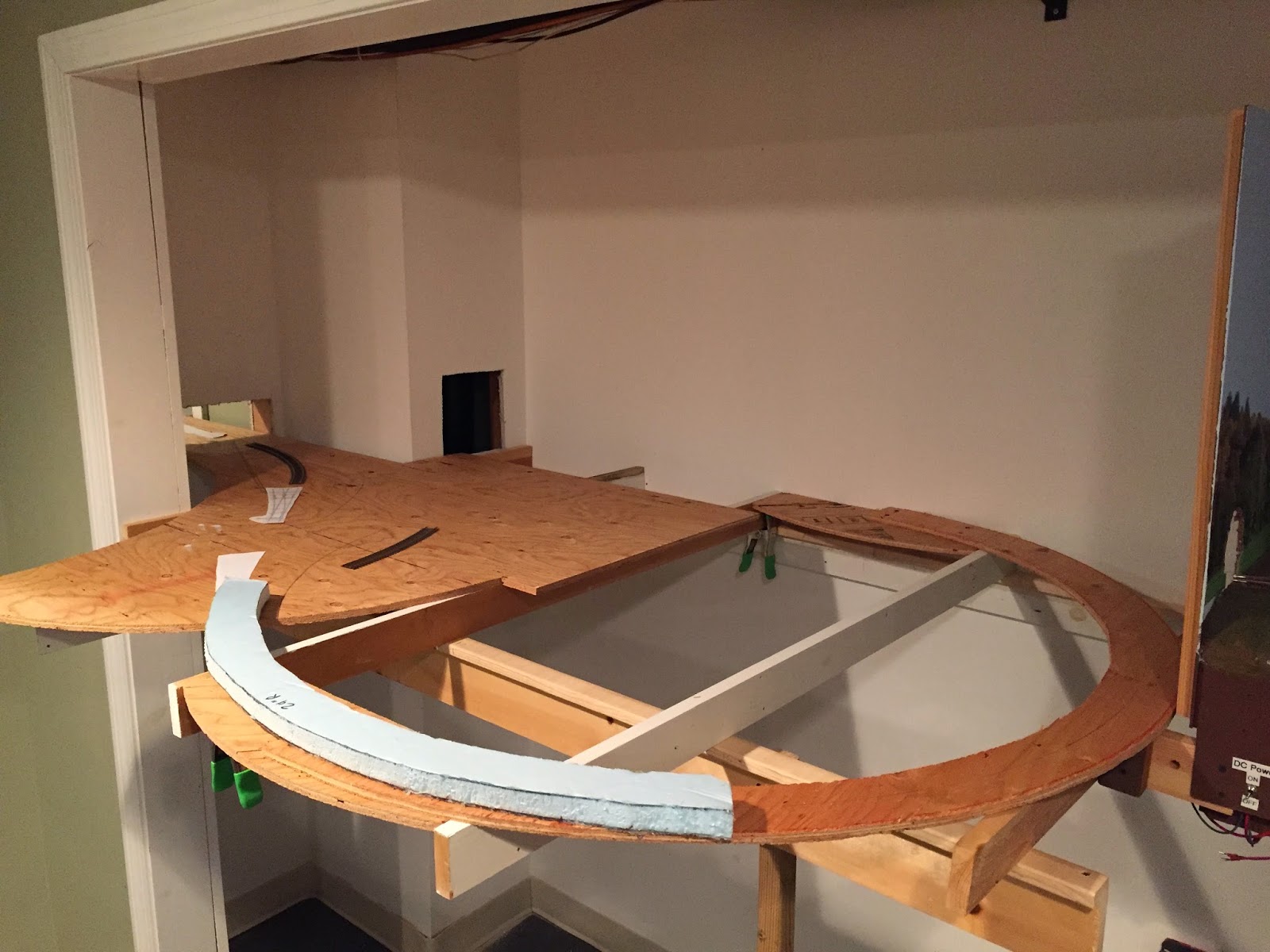 And this is the same scene taken from the other perspective. The mainline punches through the left hole-in-the-wall to head east into Saybrook, and punches through the right hole to go behind Saybrook and return to staging. I'll likely have to extend that hole a bit higher to accommodate the Air Line, which will go through above the mainline. You can barely make out the end of the module on the right. 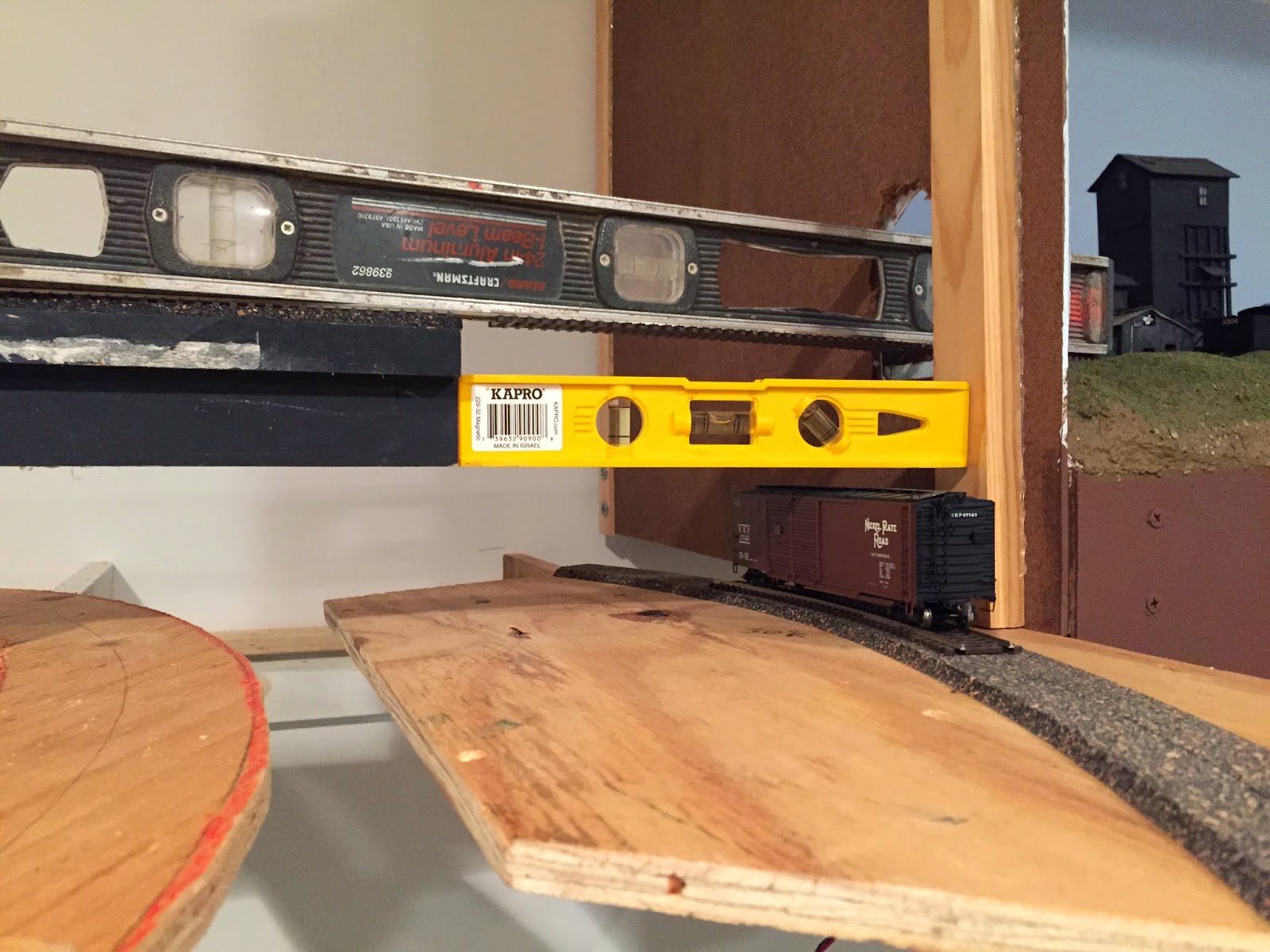 One of the critical pinch points I discovered when mocking things up is how the AirLine would cross over the mainline. While it's not a problem at this point (pictured above) since I'll be using regular plywood subroadbed on risers, it'll be critical to get it right as the two tracks go through the wall. It's a little over 3 feet between one hole-in-the-wall and the other, so the tracks will have to span that distance. The best way I've found to do that is to mount the the subroadbed directly to an L-girder made up of 1x2s - but that L-girder restricts clearance below the subroadbed. So this photo shows that I'll have just enough to get one highly-supported track over the other.

Next step is to go to the lumber yard for more materials (mostly plywood) and - even more exciting! - I get to order a ton of track! With any luck - and some productive work sessions - the New Haven Railroad's Shoreline through Old Saybrook, including "New London/Boston, New Haven/New York" will be up and running soon!
Posted by Chris Adams at 3:30 AM