Over the holidays, I decided to take a break from working on the Ballantines area.  I've hit a bit of a dead-end in my research and until I can come up with a good mock-up of the beer warehouse, I'm stuck.  With regard to the area immediately north - namely, the Rt. 15 overpass - I have a different problem: I'm pretty sure what it looked like (AAMOF, I don't think it's changed much at all since 1947) and have plenty of current-day pictures, but my modeling skills aren't up to the task of replicating it.  Just south of Ballantine's, on the other side of Jordan Lane, is Wethersfield Lumber Co. - another site I haven't any pictures of and even less info than Ballantines.

So I turned my focus to the other end of town and the other end of this section of layout: Goff Brook Bridge.  It's not technically part of Wethersfield being located just over the line in Rocky Hill, but it's closer to Wethersfield on my layout and is on the Wethersfield "side" of the peninsula.  And - bonus - it's a scenic highlight.  Unfortunately, this is the only photo I have of it from the time I'm modeling (used for yesterday's Wordless Wednesday):

This photo was evocative enough for me to want to add this scene to my layout and - another bonus - it's even from the exact perspective that I need - looking northwest.  This is the scene you'll see from the aisle.  It's a great photograph for atmosphere/scenery/scene, but not so great for modeling the bridge.  Thankfully, the bridge hasn't changed that much and can still be seen today:


According to John's recollections, back in 1947 the bridge was black (not red) and it had a guardrail and guard timbers (no longer present today).  The bridge itself is a pretty nondescript steel deck girder, but check out those abutments!  These "stone wall" abutments are typical of the Valley line and pretty distinctive.  I certainly haven't seen them anywhere else on the New Haven, so they're a "must model."

While modeling the bridge is a must, other than John's photo I wasn't sure how to go about modeling the rest of the scene.  While field trips are certainly a benefit of modeling something local, a LOT has changed over the years.  For one thing, there are Way Too Many Trees compared to 65 years ago. But when it comes to the non-scenery elements of a scene, railroad valuation maps are priceless. Railroads used these maps of their right of way for real estate valuation purposes - but for our modeling purposes,they're great for showing the track arrangement and the area around the track. Just be careful about relying too heavily on them - most of them date from just after WW 1 and things may have changed significantly by your chosen era.

Fortunately, the University of Connecticut has the val maps for the New Haven (here -http://magic.lib.uconn.edu/mash_up/nynhhrr_index.html), and here's the map of the Goff Brook area: 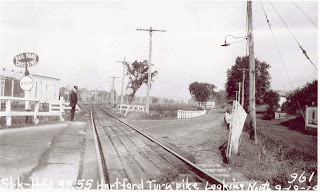 This photo was taken from the turnpike grade crossing, looking north, about 10 years after the map.  You can see the ice house in the left distance.  Note the guardrails.  John recalls they were still there in the late 1940s. 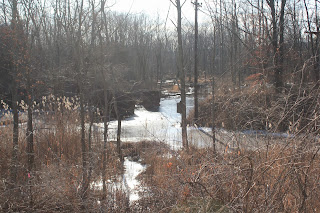 Here a shot of the old dam area, taken from the road bridge.  It's much more overgrown, and can't even be seen in the summer.  In fact, despite the fact I've ridden my bike past here dozens of times over the years, I just saw it "in person" a few weeks ago. 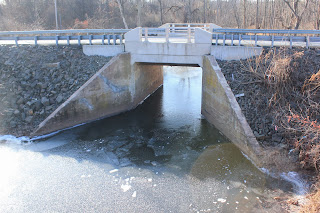 And here's the current road bridge, shot from the railroad bridge, looking west/northwest.  Unfortunately for my purposes, it was recently redone.  But I'm told that the abutments, if not original, are nearly identical to what was there.  I only need to figure out what a typical early 20th century road bridge of this length would look like.

And that's where I'm stuck at - like a lot of this project - trying to figure out a reasonable representation of a bridge (or building) that existed in 1947, without the benefit of a contemporaneous photo to work from.  Of course, any help/advice/suggestions are always welcome.

Fortunately, while I'm at a loss as to what the road bridge looked like in '47, I have enough to go on for the railroad bridge.  And with a little help from my friends (namely, Pieter & Roman), I have a pretty good model to use.  Just have to get the scene together, and that means I need to figure out what to do about the road bridge.

And so it goes.

It's been a busy few weeks since New Year's as we start to ramp up at work.  This post was actually started the last day of last year, but I'm hoping - really hoping - I can post at least a little more often in the coming days.  And I'll certainly have some stuff to report, between a special operating session in New Jersey this weekend and the BigE show in Springfield next weekend.  So, plenty to talk about - just need the time to write it up.  Stay tuned!
Posted by Chris Adams at 7:06 PM