Ghosts of Railroads Past 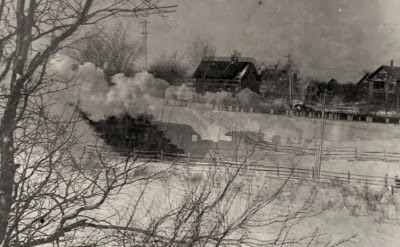 (In the "spirit" of the season, and because it's All Hallows' Eve ;^) I hereby repost this from last October. I think you'll agree it's especially fitting this time of year...)

A big part of my motivation for recreating the Valley Line is to keep alive the memory of the men & women who were responsible for getting the stuff of life delivered to you, each and every day.  From coal for winter heat to a bicycle to ride in the summer, for over 100 years in this country the stuff of life was delivered almost exclusively by rail.  And sometimes, if you're lucky, your historical research will unearth a ghost or two.

Given that it’s Halloween-time, here's a question for you:  Do you believe in ghosts?

The answer for me depends on what kind of ghosts you mean. I don't believe in the creepy un-dead or goulish wanderings of departed souls. But I do believe in the ghosts of the past - the hauntings of a place by the memories of the people who were there. Who were they? What were their dreams and plans? Were they anything like us? While dead people don't actually haunt us, the spirits and memories of the past can - and often do. Especially if you're paying close attention.

During this time of year especially, if you keep your eyes open and know where to look, you can see some of these ghosts of the past materializing.  You have only to slow down, pay attention, and keep your eyes peeled. 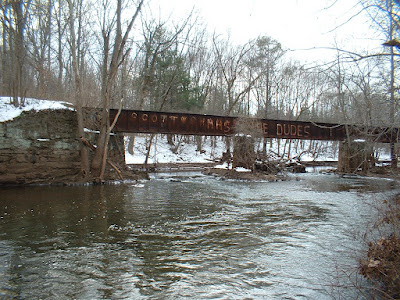 This is a bridge on the old line between Middletown and Berlin, CT. The railroad was abandoned and torn up years ago, and the trees have long since reclaimed much of the right-of-way. But this bridge remains - a monument to the memory not only of the railroad, but to the spirit of the men who built it.

If during your travels you stop at a spot like this and imagine, even for a few minutes, how those men lived, what their hopes were and whether they ever achieved them, you might see some ghosts.

And if you're especially quiet, you may even hear in the sound of the leaves floating by on the breeze a whisper of thanks from those men for not letting them be forgotten.