Is it just me, or is time flying by Way Too Fast?! Seems like just the other day that I posted a layout update. But nope - that was way back on June 6(!) In fact, other than Wordless Wednesday posts (which haven't even been every week :^( I haven't done but two substantive posts since February (the other one was way back in April).
Ugh.
In my defense, there are/were good reasons for the hiatus since early June - ranging from irritating (not one, but TWO special legislative sessions) to wonderful (a week-long visit with my parents, our wedding anniversary, and a few fun roadtrips). And summer is here, with all its goodness as well as busy-ness.
But despite it all, things have started to perk up a bit on the Valley Line - I had my first ops session in 18 months, and I acquired a few new items, all of which have definitely sparked more enthusiasm for getting to the basement.
One of the first things I got was a new air compressor for my airbrush. Here's what I've been using up to now . . . 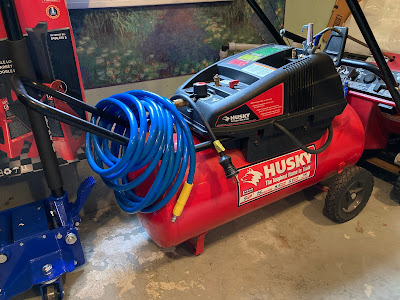 A bit of overkill, eh? Yeah - and sounds as loud as you'd expect. Even having it in another room and running a long hose from it to the 'brush didn't help matters much - especially according to the cats (that would always run for cover). So now it's where it belongs and where it can be used more appropriately - the garage.
Here's what I got to replace it . . . 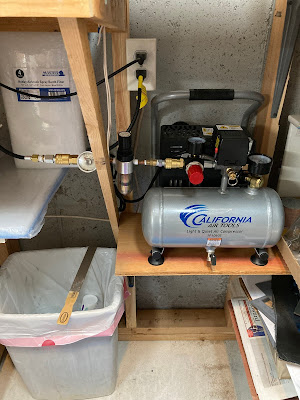 MUCH nicer, smaller, quieter - and mounted just under where I do my painting. Thanks to Randy and Bill for the recommendation
But as wonderful as it is, my new compressor isn't the most exciting acquisition  . . .
As you've probably guessed from the title of this post, that honor goes to the ProtoThrottle.

I'm blessed with a wonderful Missus who, as we were approaching our anniversary, reminded me that I had not only failed to let her know what I'd like by way of a gift, but she still "owed" me a 25th anniversary gift from last year(!). So after some hemming and hawing about not "needing" anything - and her reminding me that these gifts are in no way about "need" - I figured a ProtoThrottle would fit the bill nicely for both occasions :^)
I definitely think I made the right choice. I just wish I'd decided to get one sooner!
So, without any further ado about that, let's see what I got . . . 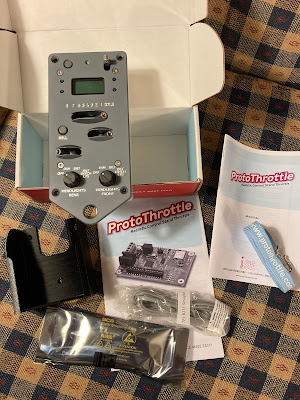 The ProtoThrottle will work with any DCC system, but the first thing you need to realize is that you can't just get the throttle by itself - you need also to get a receiver to allow the throttle to communicate with your particular system. In my case, I got the NCE-compatible receiver. I also got a fascia-mount holder, just because. 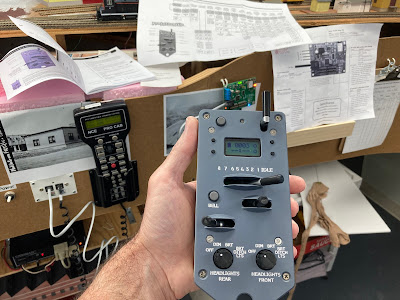 You probably already know that the ProtoThrottle is a wireless DCC throttle that mimics an EMD diesel control stand, and you've probably heard that it's complicated to set up and there's a steep learning curve. I can attest to the fact that it's pretty intimidating at first, but once I got the throttle and receiver to communicate, I was running trains with it in under 5 minutes.
However, getting it to communicate with the receiver was a little bit of a challenge - and getting it to work exactly the way I wanted with my decoders took a bit more time. I'll cover setting up the receiver in this post and will cover optimization later.
There are 3 steps to setting up the receiver (as outlined in the manual, which can be found here):
As I mentioned, I have an NCE system and the PT receiver connects to the NCE cab bus using the supplied phone-like cable. The "Base Address" of the receiver and the "Base Address" configured in the PT need to be the same in order for them to communicate. You change the receiver's address using the DIP switches.
This is where I got a bit mixed up. Read on to avoid my mistake.
According to the manual, you add the value(s) of the "BASE ADDR" DIP switches that are in the ON position to get the receiver's base address number. These switches were all off on my receiver when I, um, received it. So I figured the "BASE ADR" of the receiver was 0 (zero). 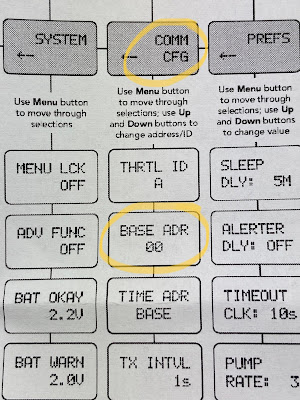 Next, you go into the "COMM CFG" menu on your PT to make sure the Base Address is the same as that on your receiver. On mine, it was "00" (the default) so I figured I was all set.
I wasn't.
After some minor frustration, I finally decided to try and just change BOTH addresses. First, I changed the DIP switches on the receiver thusly: 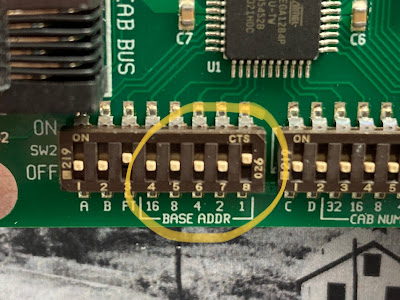 Note that the switch above "1" in the "BASE ADDR" section of the receiver is now pushed up, set to ON.
Then I went into the COMM CFG menu and changed the BASE ADR to "01"
And just like magic, it WORKED!
The manual says that both "the throttle and receiver ship with a default base address of zero" and that "any address will work as long as both the throttle and receiver are configured to the same value." I'm certainly in no position to dispute the guys at ISE, so I'm just sharing my experience. YMMV.
The only other thing you have to consider when configuring the receiver is to be sure it doesn't have the same "CAB NUMBER" as any of your other throttles.
<begin sidebar>
You do have a list of the cab addresses of your throttles handy, right? :) Here's mine: 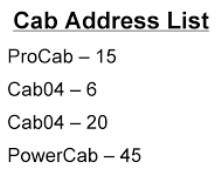 Don't worry if you don't have this info, yet. I finally got around to compiling my list after an ops session where things went crazy sideways when somebody brought a throttle with the same cab address as one of mine. Unbeknownst to me. I quickly figured out all my addresses and have maintained a list ever since. I strongly suggest you do too!
<end sidebar>
Like with the BASE ADDR, the receiver's cab number is determined by adding up the values of the DIP switches that are pushed up/set to "on" As long as that number is different than all your other cab numbers, you're all set.
And that's IT! for setting up the receiver. It actually took you longer (probably much longer) to read this post than it will take to actually do it. But hopefully you found the process easy to follow and realize it's easier than you might have thought. I do strongly recommend you read over the receiver setup manual though - especially if you have a DCC system other than NCE.
Once the receiver and throttle are communicating, you just use this throttle like you would any other. Assuming you haven't remapped the horn or bell functions in your decoder(s), it'll work just as you expect. But to get the MOST FUN out of the ProtoThrottle, you're going to want to change some CVs  and make sure the PT brake is using the brake on the decoder.
But those details are for another post. In the meantime, you can just enjoy using a throttle that actually has a THROTTLE lever as well as a reverser lever and a brake lever. No more pushing buttons!
And if you don't have a PT yet - and especially if you do - be sure to check out ISE's website and the super helpful folks over at the PT group to learn more.
Now, if you'll excuse me, I have some switching to do . . .
Posted by Chris Adams at 1:31 PM